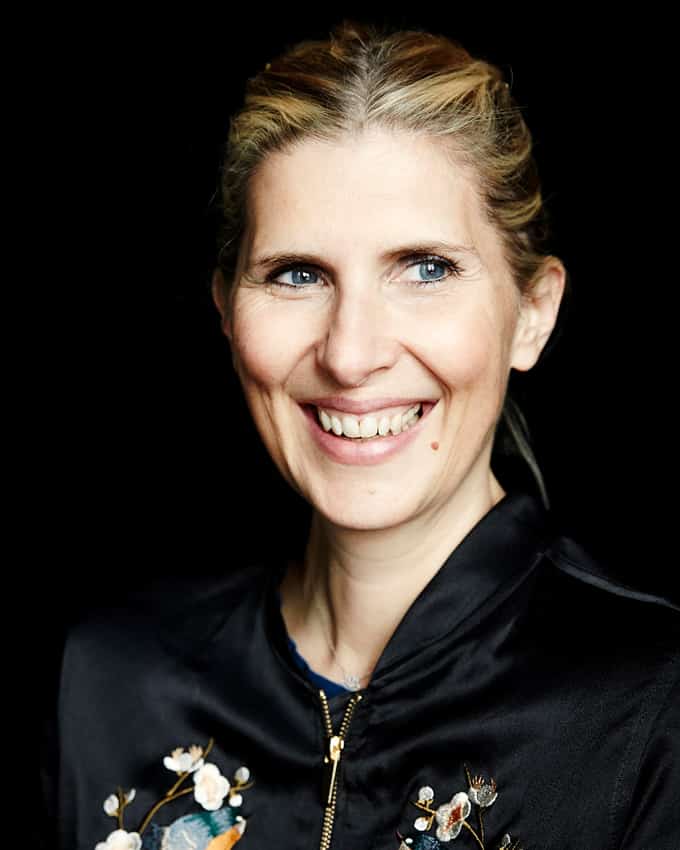 Actress Paula Paul talks openly about her recent experience with menopause, what it does to her, what it’s like with still a small child and what it means for their relationship. Paula wears her heart on her sleeve. In this interview, she talks about many things others don’t (yet) dare to. Why? She thinks we women should start being more honest about the subject. But Paula wouldn’t be Paula if we hadn’t laughed a lot in this interview. Paula, you are a great woman! Have fun watching or reading.

Susanne: I am sitting here today with the actress Paula Paul. Paula Paul is not only an actress but also a systemic coach and mother. Paula, I am glad that you have taken the time today. You once studied Theatre /Germanic Studies, then had your film debut in “Absolute Giants”, most people know you as Bea in “The mountain rescuers,” and you have also filmed internationally with Alan Rickman in “The Gardener of Versailles”, among others.

Susanne: Yes, wow, I think so too. So thank you very much for taking the time.

Susanne: So Paula, your life – we know each other – your life fits into more than just one book…

Susanne: And you are middle-aged now, but so much has already happened, so I don’t know exactly how to start. I’ll ask you directly, how are you doing today?

Susanne: Right now, at this moment.

Paula Paul: I’m fine right now. I’m well-filled from the weekend, I was at a party in Frankfurt. All my old girl friends are turning 50 this year, I’m following them really fast then, next year and that was very funny. No, I’m fine, everything is wonderful.

Susanne: Fine, 50th birthday is the keyword. how is it when you come back to your old home and see faces you haven’t seen for a long time? What was your impression?

Paula Paul: Well, the women all look great… no, actually it’s so that you realise, old swede, 25 years have really passed here and these 25 years are in the faces or also in the postures and also somehow naturally in being and then you go to the toilet and look in the mirror and think: “Fuck, somehow it will soon be that time for you too”. You look at yourself in the mirror every day and think, that’s okay, but just as I have thought about many others at that moment, partly in shock, I know that people think that about me, too, like, ‘Wow, yes, yes, that’s her’.

On the other hand, with many people, you think ‘you’re lucky, but when you dive in and talk to everyone again, you’re quickly 25 again, and everything is the same, so it doesn’t matter a damn what you look like.

Susanne: Great. That brings us the right to the subject of getting older. What is your… What does this topic do to you? Does it do anything at all to you? Is it not yet a topic?

Paula Paul: Yes, it’s a shitty topic, so I’m… I’m part of the group that thought it was easy peasy to put it away, and actually, it’s been like this for a year now… I think it sucks. I don’t think getting older is terrible in terms of appearance; sure, it’s annoying that your hair kind of goes out or that you… that everything wobbles or somehow your thighs fall to your knees, that’s the way it is, but that doesn’t bother me so much. What I find challenging is the mood swings, this tiredness, and what’s new is bad body pains. And that brings us to the topic. I thought that’s part of it and I didn’t know I was going through menopause until I thought menopause was like waking up in a cold sweat with one heat wave after another, but it wasn’t like that for me.

I thought it was just getting old, and everything hurt, it was expected, and at some point, I think I called you and Baets and said: “Guys, I’m going to be admitted soon. And through you, I came to a doctor who said, no, you don’t have to put up with that, it’s the menopause, you’re fully in the menopause, and it manifests itself differently in every woman, and in my case, it was just with joint pain, I have terrible joint pain. And I think it all sucks, I think getting old sucks.

Susanne: And when it first appeared, you said about a year ago.

Paula Paul: So that’s… about a year ago it became really stupid. Before that it started with migraine attacks when the days came or when I thought, yes, well, I had to live with it somehow. And about a year ago my hip hurt and my knees and my feet and everything was always so half good during the day, so half. And then that also affected my energy, because it became really bad pain.

Susanne: How were you prepared for the menopause? How… did you prepare yourself?

Susanne: What did you… when did you see yourself in the menopause?

Paula Paul: Well, I thought it would be at 54, somehow, it was a number like that or 52 or at some point. No, I wasn’t prepared for it to happen so quickly, but I’m quite happy that it’s happening now, because then at least I have an answer to the fact that my mood isn’t really good either. Nobody prepared me for this, in fact… that’s why I’m sitting here.

So we have to come out with that, that’s not funny. So that’s of course, I’ve had a friend who doesn’t notice anything, she says she understands but she’s like, “Hey I’m doing so great.” and I have another friend who’s doing so bad that she’s really, really, really worse off than me.

And there’s everything and because it’s just not talked about,

Of course, there’s a lot in Brigitte or Donna, it’s slowly being communicated in all the magazines, but I know few women who say it sucks.

Susanne: But that means you are already talking openly about it with your friends.

Paula Paul: I talk openly about it with you now, there are… But they are close friends. Some women don’t want to hear about it.

Paula Paul: I find it much more complex than every man, I don’t know any, except for yours so far, who don’t turn around and say: “We have to make a coffee” or suck a sweet very quickly or go to the toilet somehow.

Susanne: So for men, the topic is…

Paula Paul: Ah, that’s what gets me down, that I have to… with my partner, I don’t have a platform to say, hey, something is different, and that’s not good. And I think that men urgently need to wake up somehow, because there are reasons why all marriages break up at once in this time and that’s not just because newer women or younger women appear. Still, it’s simply because the women are not well, mostly not well and that you talk about it. Then the thing could also be relatively quickly off the table, but…

Susanne: That means women don’t talk about it much…

“And I think men need to wake up quite urgently somehow, because there are reasons that all marriages break up at once in this time …”

Susanne: Have you ever thought about why there is menopause at all, who thought it up? What is the evolutionary meaning of this at all? Then you could at least observe in nature with the orcas that the female older orca animals lead the pack, they find the food, so they are enormously important for the whole pack and they help to raise the young. And if they were still capable of giving birth, they would not be able to make their strength available to the pack. In this respect, this is. Actually, this is the “grandmother hypothesis”, actually this has something good in terms of evolution, but you first go eventually, so not all women, fortunately, go through relative pain.

Susanne: That means that no one has enlightened you…

Paula Paul: No. There was no mother, my mum died very early.

Susanne: Tell me, how old was she?

Paula Paul: She was 47. I was very young then. I found indications afterward that she wasn’t well, because Wobenzym, that’s a joint medicine, was everywhere, so she must have had a lot of joint pain too, but there… I was… how old was I…? 19, so you don’t talk about menopause. I’m going to prepare my daughter for it in a different way, because I… or hopefully we’ll be further along, in 20 years or 25 years, that they deal with it differently, because… and also know in their early/mid 40s that something might come along that hurts, just hurts. Or what… and that no Botox pill, injection or whatever or hyaluron or anything else helps, but that you have to go through it with your soul.

“I will prepare my daughter differently, because I… or hopefully we’ll be further along, in 20 years or 25 years, that they deal with it differently and also know that in their early/mid 40s something might come along that hurts, just hurts.”

This is the first part of our interview with Paula Paul. In the second part, she talks about her physical complaints and how her experience with doctors was on the subject.

In the third part, Paula tells us where she sees herself in five years, how she would like to live and work then. And she also has a passionate appeal to us women. 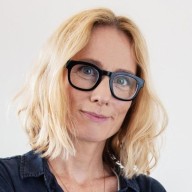